Most expensive house in New York City: $161 million mansion on the Upper East Side in Manhattan

After the fall of the Soviet Union in 1991, some Russian oligarchs were able to amass huge fortunes ranking among the richest men in the world.

According to Forbes, “Russia currently has 77 billionaires despite the country’s economic crisis.”

Over the past two decades these Russian oligarchs have been instrumental in the development of the yachting industry, setting a new benchmark for what a mega yacht is all about.

In 1990 the superyacht world was mainly dominated by Middle Eastern royal families and Greek tycoons like Stavros Niarcho (he commissioned Atlantis and Atlantis II). The 147-meter Prince Abdulaziz, owned by the Saudi royal family, was once the largest yacht in the world.

In the late 1990s and early 2000s, the mega-yacht industry began to shift into the hands of the Russian mega-rich and American tech billionaires. From 1992 to 2005, 20 super yachts over 80 meters in length were delivered, surpassing the 19 mega yachts distributed between 1865 and 1992.

The financial crisis of 2008 hit the yachting industry hard, especially the sales of small and medium sized boats.

When many thought the mega yacht world would also collapse, it continued its exponential growth. Between 2008 and 2016, another 48 mega yachts have been built, doubling the number of yachts over 80 meters in length delivered in previous decades.

Even larger private ships began to be built, such as the 162.5-meter Eclipse delivered to Abramovich in 2010. This growth in uncertain times was due to the proliferation of Russian oligarchs.

Serene was the first ship built by Ficantieri and was ordered by Yuri Sheffler before being sold to a Middle Eastern buyer in 2015. In 2008, the year of the economic downturn, Alisher Usmanov took delivery of the 110-meter Dilbar yacht.

Afterwards, many thought that the mega yacht industry would finally collapse with Russia’s economic crisis. However, the demand for these huge vessels did not wane. In 2014, the 104-meter Quantum Blue was delivered to Sergey Galitskiy and Viktor Rashnikov bought the 140-meter Ocean Victory.

In the summer of 2016 a new Dilbar, now speculated to be the world’s largest yacht in sheer tonnage, was provided to Usmanov. As for Abramovich’s marina, it is now distributed among several Russian owners after the Chelsea FC owner sold some of his toys.

The mega yacht industry continues to grow, and we remain hopeful that we could soon witness a 200-meter yacht.

Here are some of the most advanced and industry-leading yachts that have been commissioned by Russian oligarchs in the last two decades.

Although full details of the yacht were not disclosed, it is known that her interior features designs by London-based Terence Disdale Design.

It is speculated that the Eclipse has a military-grade anti-missile system, is armored, and even the windows are bulletproof.

It has three helipads, a private theater and a gymnasium.

The world’s largest yacht by volume, the 156-meter Dilbar was delivered to Alisher Usmanov in May 2016.

Lurssen maintained total confidentiality regarding the mega yacht’s features, but we know that the exterior design is authored by Espen Oeino and the interiors by Andrew Winch.

It is also known that the vessel has a steel hull and an aluminum superstructure.

The Russian oligarch has another Lurssen superyacht, the 110-meter Ona, which previously had the name Dilbar (in its first version).

Delivered by Fincantieri in 2014, Ocean Victory was designed by Espen Oeino.

Designed by Philippe Starck she is capable of accommodating 14 guests in 7 luxury staterooms, and also has space for a crew of 42.

Melnichenko’s second super yacht is currently under construction in Germany. 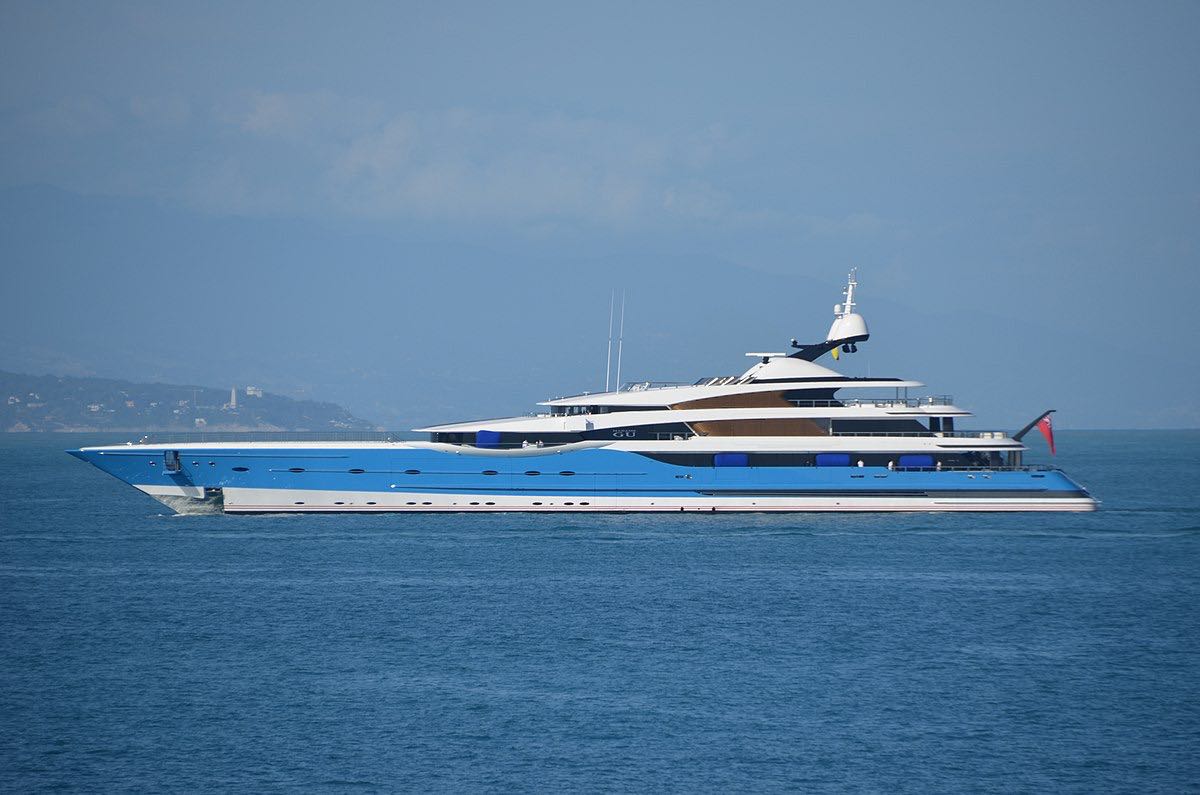 According to Forbes Russia, the 99-meter super yacht belongs to Andrei Skoch.

Madame Gu was built by Feadship in 2015 and delivered after four years of construction.

The crew quarters consist of 18 cabins for 36 members.

This super yacht has 3,600kW MTU engines that provide a top speed of 24 knots and a cruising speed of 22 knots.

With an original design by Michael Leach, the Palladium belongs to Mikhail Prokhorov.

It has a steel hull and aluminum superstructure.

Built by Oceanco in 2012, Nirvana was the star of the Monaco Yacht Show due to its revolutionary features.

Designed by Sam Sorgiovanni, this vessel has a transpacific range and a top speed of 19.5 knots. Nirvana came to be for sale at 199 million euros ($223 million), but the sale never happened.

Could it be that Vladimir did not want to share this yacht with his ex-wife and that is why it disappeared after 30 years of marriage?